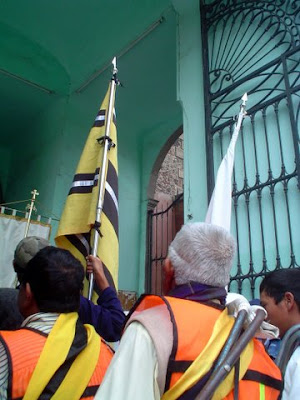 Today, Holy Thursday, there is a famous pilgrimage from Irapuato, Guanajuato to Salamanca, Guanajuato to the church of "La Parroquia del Señor del Hospital (ohs-pee-TAHL) to pay homage to "El Cristo Negro". The Cristo Negro is an image of Christ on the cross that was made in the year 1543 out of a paste consisting of the pith of corn stalks and the ground up bulb of a certain orchid. The image shows Christ with his head hanging way down on his right side with his chin touching his chest. The body is very thin and the ribs are quite prominent. In addition, the body is completely black. The actual figure of Christ is about five foot ten inches and weighs only about 30 pounds. It was made in a town called Pátzcuaro, Michoacán and was brought to Salamanca, Guanajuato in the year 1560 when Salamanca was still called by the Indian name "Xidoo". 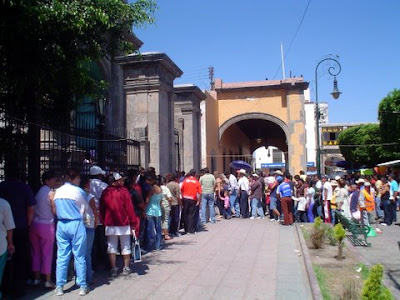 There is a legend that during the time of the "Cristero War", when the Church was being persecuted in parts of Mexico in the 1920’s, the figure of Christ was taken down and hidden in a mine shaft. When the persecutors went to look for it the figure turned the same shade of black as the walls of the mine so they couldn't find it. That is one of the reasons why it is considered miraculous. Every year on Holy Thursday thousands of people from all over the region walk the ten miles from Irapuato to Salamanca to visit the Cristo Negro. The people from Salamanca take the bus to Irapuato so they can walk back to Salamanca to make the pilgrimage. The highway is lined with thousands and thousands of people and get this... they march in complete silence. Some of them even walk barefoot. The first time I saw people walking barefoot in the gravel and bits of broken glass and other detritus along the side of the highway it gave me the shivers. I never cease to wonder about the faith of these people. I too have faith but I have more faith in my automobile than my own two legs so I drive to Salamanca and carefully pass the thousands of pilgrims who line the way. 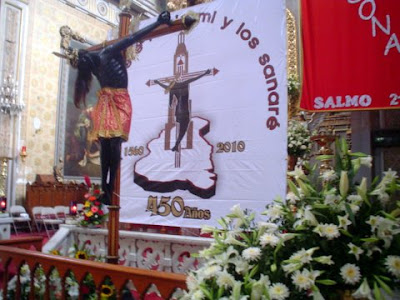 I park my car in a parking lot in Salamanca about as close as I can to the church and then it generally takes me about a half an hour to work my way along with a river of people to get to the entrance of the church and then about another hour to get through the church and back out. Most of these people have already walked ten miles (or more) to get there and some of them are pretty weak. One time, a girl about five feet in front of me fainted dead away and they dragged her over to the side. Fortunately we were not yet in the thick part of the throng and there was a little space to revive her. The people who faint in the really thick press of the crowd can't fall down and have to be carried along with the crowd in an upright position until they can be rescued. After many baby steps and much patience you come within four feet of the Cristo Negro and I guarantee that you will not be disappointed. It is one of the most lifelike and beautiful crucifixes that I have ever seen. Most crucifixes are fairly stylized along the same pattern but with the Cristo Negro the body of Jesus hangs off the cross like a piece of dead meat and is probably more realistic that most people are ready for. 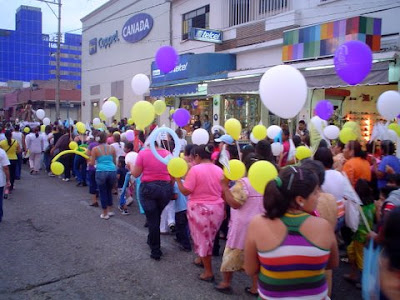